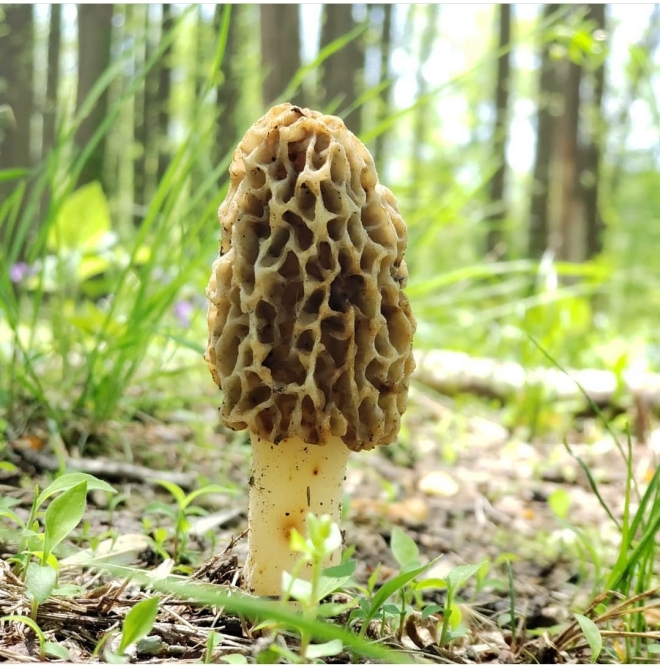 Fungus Funtime for a Doomsday Prepper

The season of mushroom mania and fungus is among us! Adored as culinary delights, respected as medicinal tools, and divinely honored as spiritual guides, fungi are one of Earth’s power houses. Mushrooms and the world of fungi have always been an interest to me. With my last name of Kennette, and growing up in proximity to Kennett Square, Pennsylvania ( The mushroom capital of the world ), and my father having a seventies mushroom tattooed on his arm, I also grew up a die hard Smurf fan, and ever since my teen years I have been following the path most closely to one with the spiritual make up of a, “Naturopathic Shaman of the Woods”.  I really like mushrooms… Especially with butter, onions and garlic!

With a little help from my friends, a few years ago I began focussing my passion and accumulated knowledge into adding mushroom production into our farming repertoire. What I am about to share with you is a foodie life hack that will either save you, or kill you…

It’s name is best suited as, Super Spawning. Now before we go any farther, we must review one VERY IMPORTANT thing. Some mushrooms will make you so ill you will wish you were dead, and some will just kill you. So be sure to learn how to identify mushrooms before you just go popping caps and stems in your mouth! Ok, moving on to the good stuff.

Super Spawning, usually refers to the act of crumbling up old substrate that mushrooms were once growing in and introducing it into a fresh new substrate so it can continue its mycelial growth and create a fruiting body (mushroom) once again. Its almost like splitting up the roots on a perennial plant to help it spread out around your yard. Just incase you are caught up on “substrate?”, it’s the medium in which the fungi mycelium eats and grows through so it can develop into its form that can once again create the fruiting body that we like to eat.

Different mushrooms prefer different substrates, different temperatures, different amounts of humidity and often just enough light to know which way is up. Most mushrooms are considered saprophytes, meaning it lives on dead or decaying organic matter. Some prefer to grow as shelves off of a tree, where as others “top grow” from the ground up.

Often when you purchase mushrooms at the very base of the mushroom you will find some crumbly stuff and if you are really lucky, maybe even some white fuzzy, feathery strings that resemble roots. If so, you my friend have just scored bigtime! Cut it from your stem or cluster and put it in an unsealed ziplock in the fridge, we’ve got some work to do!

1: Confirm what type of mushroom you have, do a little research on what its preferred substrate is. Chances are you will need something like pasturized straw, ground up corn cob, or hardwood woodchips. 2: Pasteurize the substrate. (Usually either a boil for an hour or some sort of Ph spike). It needs to be clear of any other fungi so your samples in the fridge have no problem dominating in the race of mycelial development called Spawn Running. 3: Strain and spread onto clean working area. 4: break up the pieces and nubs of mushroom from bag in the fridge. 5: Once the substrate cools down to room temperature incorporate the mushroom pieces into your pasteurized substrate. 6: Load up your inoculated substrate into clean plastic gallon bags. Assuming you dont have breathable micropore tape, you will need to pop a few pinholes in the bag so there’s a teeny tiny bit of air exchange. 7: put your little pillows of funk in a black or opaque trash bag and store it somewhere dark and warm for a few weeks. *DO NOT TIE THE BAG SHUT it needs a little air remember. Not much, just a little. Try just twisting it closed.

If all went well, after a few weeks you should see some white growth taking over the substrate. If you are seeing other colors, excluding the murky urine colored moisture that will eventually build up aroumd the bottom of the bag, than there may be a problem. Once the bag is beginning to look like a cake with white icing it is ready to fruit! Cut some 1″ X’s in the bag for the mushrooms to fruit through. If u have a way to control humidity than great, or u can make a little plastic bag tent over your experiment and just remember to mist it a few times a day. Eventually the magic of pinning will begin.

Pinning occurs as the fungi decides there’s too much open air space and oxygen for the otherwise subterranean growth. It then creates its end of life form and attempts to drop its spores to reproduce and expand. In other words, it makes mushrooms!

If you’d like to learn more, once the COVID19 quarantine restrictions are lifted you can take a grow your own mushroom workshop with us at Martenette Farms in Hillsborough, NJ!

*Bonus trick for you!