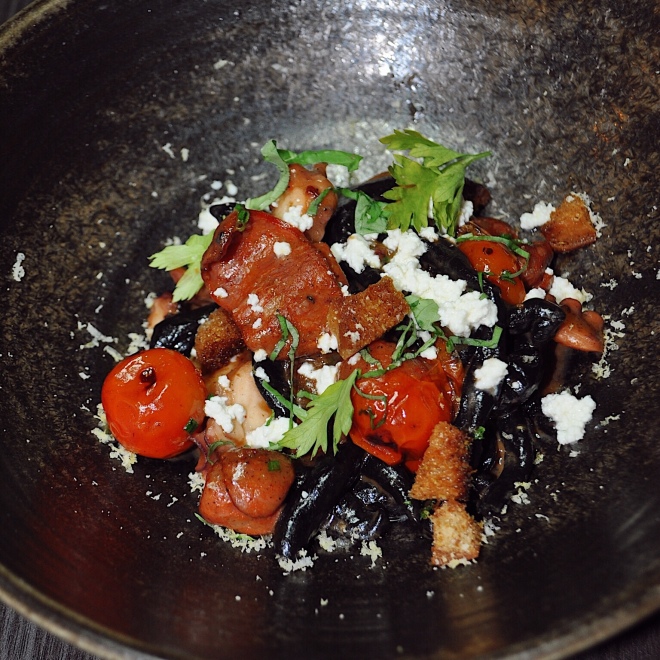 When we got invited to De Martino in Somerville, we didn’t know much about cuban food and to be completely honest, we had extremely low expectations. Many say that the top 3 worst things in Cuba is breakfast, lunch, and dinner. Without naming names, we have casually visited a couple of cuban inspired eateries in the state and have always walked out regretting our poorly spent dollars.

When we were approached by the head chef at De Martino, we already knew some history of the Martino name, but everything we knew was wrong. Martino was a restaurant located on the corner of Doughty and Main Street in Somerville, NJ. If you’re a local you can already picture the church with the face-like facade. Martino opened in 1992 and ran as a beloved family business for almost 30 years before closing its doors.

When we heard about the return of the Martino name to Somerville, we were wrong to assume it would be the re-opening. De Martino, not to be confused with Martino, is a completely separate entity ready to rewrite what we all know as cuban food. Chef Martino opened De Martino to showcase his craft bringing old world traditions and ingredients to new world techniques.

With the home-like decor and pictures on the wall, De Martino makes you feel like you’re at a local paladare (family owned/operated house restaurant in Cuba.)

So how do you take traditional cuban ingredients and dishes and elevate them? We weren’t quite sure how Martino was going to pull this off, but it’s safe to say he has a not so secret answer and he goes by the name of Ryan Corbin. Ryan, Chef Martino’s right hand man is a colleague of ours in the industry, who has learned and perfected his craft from places like The Ryland Inn and Mistral in Princeton and King of Prussia. After trying an array of dishes at De Martino, its easy to see both Martino and Ryan’s influence in everything we tasted. That my friends, is the perfect balance of tradition and new world cuisine.

Everything from the plating, the motions of service and the easeful faces of polite hospitality, made this trip well worth it. We started the evening with dishes that represented the Chef’s roots and of course, the style of service.

These smoked cod fritters were the perfect first snack to share. These salty, fluffy fritters were served with scallions, pickled Fresno peppers and a smoky paprika creole sauce on the bottom. Highly recommend pairing this with a crisp ale or even a nice glass of champagne to start the evening! (De Martino is BYOB!)

You like crispy pork belly right? This coffee cured pork belly was cured for 2 days in warm spices and cooked slowly for 16 hours in a sous vide with aromatics and a touch of espresso. This pork belly was accompanied with an apple and fennel slaw with a mojito coconut milk vinaigrette.

The next course really made our tastebuds do a happy dance with all the flavors and textures. Soft house made squid ink trofie pasta with house made chorizo, charred cherry peepers, baby cippolini onions, tender octopus, smoked cured egg yolks and orange scented bread crumbs. This dish was by far our favorite of the night, if forced to pick.

After finishing our pasta we received a refreshing dish to get both our palettes and stomach ready for what was next. This Ensalada de Quinoa, was made up crispy fried chickpeas, poblano peppers, lime vinaigrette, and a cilantro crema brushed underneath.

Next was the Slow Oven Roasted Pork Shank served over Mofongo mixed with Sofrito. It was all covered with a delicious Mojo Vinaigrette. This dish comes equipped with a crunchy soundtrack to make you salivate.

After, we were served these absolutely tender – fall off the bone – Oxtails with a spicy Demi Glace sauce and a creamy Yucca Mash with Assuage cheese. These were heaven.

The next dish surprised us in the best way possible. This dish portrays what authentic Cuban food is about. Although simple is was a perfectly seasoned whole fried Snapper with a charred half lime, and a gracious mixture of olives, peppers, tomatoes and cilantro. We recommend sharing this dish with friends as this dish is well served for a group, or completely devouring it by yourself if you come with an appetite.

As the food coma begins to set we just couldn’t pass up dessert. We topped our bellies off with a sweet toasted coconut rum infused flan as well as a classic tres leche. Head over to our instagram to see more!

We thank Chef Martino, Chef Ryan, and the lovely servers for a perfect foodie night. We are humbled and thankful to Martino for allowing us to be a part of such a special time where authentic traditional food fusion is becoming acceptable. Chef Martino is excited and eager to feed you and your loved ones a nice dinner so keep De Martino in mind the next time you go out and make sure to leave us a comment on facebook and instagram with your experience!